The promotion of Aboriginal and Torres Strait Islander histories and cultures as a cross-curriculum priority in the new Australian curriculum, alongside the other cross-curricular priorities (‘Sustainability’ and ‘Asia and Australia’s engagement with Asia’), aims to “provide national, regional and global dimensions which will enrich the curriculum through development of considered and focused content that fits naturally within learning areas” (ACARA, 2015). These priorities are required to be embedded in all learning areas, and the ACARA website gives the key concepts and organising ideas, allowing teachers great scope to apply them in their own specific context.

Teachers and teacher educators are constantly challenged to adapt to new initiatives in the curriculum space, and many may struggle to include new priorities and content within a program already considered “crowded” (Department of Education, 2014). While it could be seen as an additional burden for teachers to bear, a more positive angle sees it as a new opportunity for professional development, by widening and deepening understanding of these important topics. Research indicates that targeted training in Indigenous studies has benefits for teachers engaging in a space that can often be contested and challenging (Craven, Marsh & Mooney, 2003; Craven, Yeung & Han, 2014; Mooney, Halse & Craven, 2003), and non-Indigenous educators may require support to enable them to incorporate Indigenous knowledge respectfully and appropriately in the classroom. Responses and opportunities may vary between urban, rural and remote schools, depending on existing connections to Aboriginal and Torres Strait Islander peoples and cultures. Rather than just an add-on, the histories and cultures of Indigenous people can be integrated into each learning area to bring new perspectives to existing knowledge and practice, and to encourage interesting and innovative ways to incorporate this knowledge.

An open access online resource available to all teachers and students, the Living Archive of Aboriginal Languages[1] contains thousands of authentic texts which can support the inclusion of Indigenous knowledges across the curriculum. The archive allows teachers and students around Australia to easily access a vast range of literature, art and language, leading them to think about different ways to consider Indigenous knowledge in their own contexts, including exploring opportunities for connection with local authorities, research into culture and language of the area, and even to investigate opportunities to support language revitalisation. Schools and teachers with limited or no connection to Indigenous peoples can easily access materials that can be readily used in the classroom, and those who have connections can also use these resources to support or develop relationships and incorporate knowledge directly from Indigenous authorities.

One of the legacies of the bilingual era in the Northern Territory (1974 – 2000s) is the large number of resources developed for classroom and community use, which are finding new life online in the Living Archive of Aboriginal Languages (Bow, Christie & Devlin, 2014). Thousands of items in around fifty languages of the Northern Territory are made available under a Creative Commons license which allows users to share and distribute the materials with attribution of credit to the creators and source, for no commercial benefit to the user and with no right to share derivatives of the material (Creative Commons, n.d.),. The original authors, illustrators and other creators (or their descendants) have given permission for their materials to be made available in this way, and many are interested in collaborative work with interested users. The archive was created in line with the protocols set out by the Aboriginal and Torres Strait Islander Library Information and Resource Network (ATSILIRN, 2012), and users agree to use the materials respectfully, in accordance with Indigenous Cultural and Intellectual Property rights, as described for example in the Indigenous Cultural and Intellectual Property (ICIP) Information Sheet (Arts Law Council of Australia, n.d.) and according to the website’s User License Agreement (Living Archive, 2014).

The materials in the archive include traditional and modern children’s stories, transcribed recordings of old people telling stories of local cultural significance, creation stories, histories, natural science, instructional materials, ethno-botany, cautionary tales, and many other genres. In addition there are teaching materials, literacy primers, and translations or adaptations of stories from other languages. Many (though not all) include English translations, and some also include word-lists or glossaries. They represent both traditional and Western knowledge presented for an Indigenous audience in remote Northern Territory communities. The Living Archive itself builds on decades of collaborative research with Indigenous knowledge authorities, including discussion of the role of digital technologies in both developing and storing knowledge work (Christie, Devlin & Bow, 2014; Christie & Verran, 2013; Verran & Christie, 2014).

While considerable effort has gone into making these materials accessible through the Living Archive website, the existence of such a resource is not in itself sufficient. To ensure that it is a ‘living archive’ requires engagement at different levels, from the Indigenous communities of origin to the wider educational landscape in Australia and beyond. Assistance is required to guide teachers, students, researchers and other users through the rich set of data available, with guidance in how it may be used in the classroom and in different pedagogical contexts and at different levels. Some teachers may feel intimidated by the ‘foreignness’ of the materials in different languages, particularly those without an English translation, which can be filtered out using search or browse functions.

All the languages are written in a Latin (Roman) alphabet, though the words are not pronounced like English – a useful guide to pronunciation of most Indigenous languages can be found on the Victorian Aboriginal Corporation for Languages website which also includes a useful ‘talking head’ demonstration of the different sounds (VACL, n.d.). Some materials in the Living Archive include audio recordings, as it is not recommended that teachers or students with no knowledge of the languages attempt to pronounce the words. The search function works by word or phrase in English or language, and searches not only the metadata but full texts, and returns results in order, so materials with the search item most prominently or commonly included will be shown at the top of the results page. Search results can be further filtered, and advanced search options are also available.[2]

An earlier paper (Devlin, Christie, Bow, Joy, Green, 2014) introduced the Living Archive in a curriculum context, and suggested ways in which the materials could invigorate connections between and within schools, researchers, and the traditional owners of Indigenous languages and cultures. The paper demonstrated examples of usage in the classroom and in the wider community, including theme-based work such as: exploring the uses and significance of honey in Indigenous culture; digital knowledge work through development of multimedia skills through the creation of related items such as talking books based on materials in the archive; as a bridge to English language learning; and for the professionalisation of Indigenous educators. The paper also addressed the draft framework for Aboriginal and Torres Strait Islander languages in the Australian Curriculum (ACARA, 2013), and how materials in the Living Archive can serve all three pathways identified there – for First Language Learners, Language Revival Learners and Second Language Learners – specifically focusing on schools with Indigenous learners. The present paper seeks to expand on some of the issues presented there, by identifying specific resources within the Living Archive which can be used in each of the learning areas in the Australian curriculum.

Incorporation of Indigenous knowledges in the curriculum will look different in different contexts. Remote schools in northern Australia can draw on local knowledge authorities across all areas of the curriculum, by inviting elders into the classroom to share their knowledge. In more urban communities, there are often local Indigenous authorities wiling to visit schools to share knowledge. These can be found, for example through language centres, a list of which is available online (RNLD, n.d.). Teachers in communities which have difficulty identifying Indigenous people who can speak for the local area and their own knowledge traditions may require additional resources, such as those available in the Living Archive. These resources may be used in isolation, or as part of a suite of materials from various sources. In recent years there has been a significant increase in the availability of online materials relating to Indigenous knowledges and cultures, often produced by and with Indigenous people, and many of which have teaching resources linked to specific curriculum areas, for example at Scootle (Education Services Australia, 2016) and Sharing Stories (Sharing Stories, 2014). In Australia’s multicultural classrooms, introducing such perspectives can also encourage vibrant discussion with students from other ethnic backgrounds, creating an even richer conversation.

The remainder of this paper will address each learning area included in the Australian Curriculum (some of which are still subject to final endorsement at the time of writing this paper) and, using the content descriptions that support the knowledge, understanding and skills of the cross-curriculum priorities (presented in ACARA, 2015), identify examples of how materials contained within the Living Archive can be used to incorporate such knowledge in the various areas of the curriculum. Educators are invited to contribute ideas to share with others to encourage more innovative ways to work with these knowledge systems. 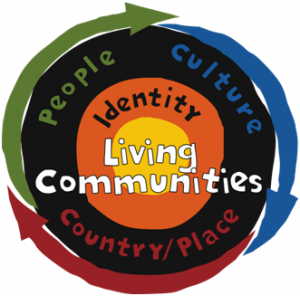 At the risk of oversimplifying an extraordinarily complex web of overlapping concepts which make up just a portion of Aboriginal and Torres Strait Islander life and culture, the conceptual framework for this cross-curricular priority is stated in the Australian Curriculum as follows:

This is a useful entry point to a set of histories, cultures and knowledge practices that can then be teased out across different areas of the curriculum. The Australian Curriculum includes a set of Organising Ideas for each cross-curriculum priority to reflect the essential knowledge, understandings and skills associated with that priority. Among the Organising Ideas, which reflect the essential knowledge, understandings and skills for the priority, number four states that “Aboriginal and Torres Strait Islander societies have many Language Groups,” (ACARA, 2015) a fact which is immediately apparent from the map which welcomes users to the Living Archive site at http://laal.cdu.edu.au/. On this map, each language is marked in a distinct colour, and hovering over a region on the map identifies the name of the associated language. Language labels can also be toggled on or off, as can place names. The ‘Browse’ button opens a list of languages which have materials included in the Archive, and the number of items associated with each language. This is a simple yet effective way to introduce students to the sheer number of distinct languages in the Northern Territory, and their links to place. This notion can be further explored on a national level by investigation of the AIATSIS language map (Horton, 1996). Other useful references include the Gambay map (First Languages Australia, 2015) which also contains additional information about specific languages and allows users to add content, the Australian Indigenous Languages Database known as AUSTLANG (AIATSIS, n.d.) and the AIATSIS Language and Peoples Thesaurus (AIATSIS, 2007). Students can explore the languages of their region, and investigate the vitality of those languages. Many studies of Indigenous people include information about the strong connections between land and language, and at least one story in the Living Archive (Ganbulapula, Yunupiŋu, n.d.) describes the story of an ancestor using language to sing the land into being.