I can’t express effusively enough how wonderful (and important) I think the Living Archive of Aboriginal Languages is.  It’s been amazing to see new life breathed into materials I had thought were lost in the mists of time.  I know at least one Arrernte woman who was very moved to find that some of her past work was now publicly available on the web. Moreover, I have found it to be an extremely useful research tool.

The reproduction of the materials in both original (pdf) and text format has made it very amenable to comparative linguistic research through the search function.  As a simple example, I used LAAL to explore uses of the “pan-Australian” exclamation /yakay/ ‘wow!; ouch!; hey!; oh no!’ (and its variant spellings) and found data from languages as different as Anindilyakwa, Arrernte (Eastern and Western), Djambarrpuyngu, Gumatj, Murrinh-Patha, Pintupi-Luritja, Tiwi, Warlpiri and  Wubuy. At least one of these languages had no entry in the available (and extensive) dictionary and grammar, but did have numerous text examples in readers that were only discoverable through LAAL. Also, where /yakay/ was recorded in a grammar or dictionary, it was commonly the case that no examples of use were given – and, once again, LAAL came to the rescue.  The availability of the pdf version means we can also get a much better contextual understanding of the use of the interjection because of accompanying pictures or illustrations. Further, in several cases /yakay/ is used in a speech bubble in  a picture or photo, thereby making it clear what accompanying bodily and facial expressions co-occur with the use of the exclamation.  I understand this is a simple, and perhaps minor, example of how LAAL can be used, but it should suffice to indicate the archive’s rich potential.

I also believe that the numerous books where the author has also illustrated their own work can provide important evidence on issues which are relevant to linguistics, social semiotics and cognitive science, since the two perspectives (linguistic and visual / pictorial) allow researchers to explore similarities and differences in how information is represented in the drawing vs. how it is represented in language.  In other words, it is not just a language archive, it is a multimodal archive that demonstrates, among other things, a nice range of local artistic representational talents and choices.

Finally, I applaud the attempts that have been made to expand the usefulness of materials for schools and communities through initiatives like the Living Archive’s Digital Story Competition. It was great to be able to hear and see stories that had previously only had a ‘print’ presence. It would be nice to see further similar initiatives.

I only have one current suggestion for improving the usefulness of the archive – fuzzy string searching (approximate string matching). This would help both community members and researchers alike: given the variability in orthographies and spellings even in one language, it can be hard to find exactly the items one is searching for.

All this is simply to say congratulations to the members of the LAAL development team. 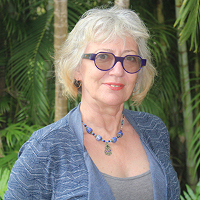 Dr Sue Smith, Senior Lecturer in Education at Charles Darwin University has sent a lovely message about how she uses the Living Archive in her teaching.

Just a short note to say how useful the links to the Living Archive in my subjects are for students.

I teach child and Adolescent Development that includes language acquisition, and effects of family, peers and culture/s.

Children have tremendous potential to learn languages, and it is vital that that they maintain the languages of their families and communities for their overall wellbeing and ongoing educational successes.

The Living Archive is a wonderful resource to introduce some of these complexities to my students, a repository for teachers to access to provide resources that can capitalise on Indigenous students’ languages and knowledge, and provide an entry point for non-Indigenous students to learn about Indigenous cultures with authentic age-appropriate materials.

This is a wonderful resource that offers itself to many learning contexts.

Thank you to you and the team,

I got the students to use the archive for various short homework exercises. For example:

The students also used the archive to complete a project in which they constructed a part of a learner’s grammar on the basis of the primers/readers and similar. For example, one group had a plain-language explanation of how grammatical relations are expressed (e.g. “how you know who is doing the action and who is affected by it”). The students really loved working with the real language materials.

I suggested to the LAAL team that it would be useful to be able to copy and paste the citation reference for the books the students used. Now they’ve added that feature, it will be really useful next time I run the Australian languages unit (first semester 2016).

If you have a story to share about how you’ve used materials from the Living Archive, let us know!

Sally Cunningham from Worawa College visited us in Darwin recently, and shared with us about how the school is using materials from the Living Archive.

Worawa Aboriginal College is a girls’ boarding college catering for Indigenous girls in years 7-10.Worawa is located in Healesville, Victoria, about an hour’s drive east of Melbourne. The 70 students currently attending Worawa College come from across Australia, many from remote communities in the Northern Territory. Most students speak an Aboriginal language as their first language, and some students speak up to four languages, as well as English.

At Worawa College, we acknowledge the richness and diversity of our students’ languages, and we also recognise the cultural pride and strength that comes from valuing these languages in the academic program. All of our students engage with some language work within the school week, and some students are part of targeted language literacy work.

The Living Archive of Aboriginal Languages is often used in this teaching and learning. For the students who have been immersed in their language, these archives can enhance and support their reading and writing. For students who are beginning to learn their heritage language, the archives are used to explore different topics and learn new words. As language and culture is embedded across our curriculum, the archive has been used in a variety of subject areas. Language books have been used to look at bush foods in Science, and for exploring different stories for incorporation in artworks.

Students actively engage with their first or heritage languages, and also enjoy exploring the languages of their friends at Worawa. The Living Archive books can provide a link to their home communities through language and some students recognise authors, artwork and images from family members This can be very powerful for them.

By Sally Cunningham and Kathryn Gale

“We are reading books about dogs. So looked for a Kriol on

e on the Living Archive website and found Angriwan Dotdot. Read it aloud to the kids with the (Kriol-speaking) Teacher Assistant who said I didn’t need any correction (yay) and you should have seen my kids… They were at such ease… I was asking them to recount and they were recounting with 100% accuracy. Then they asked for more! “Naja Kriol one”. So we read Bifo Langa Drimtaim. Such a long story but they didn’t care… They were right into it. Such a crazy good feeling. I had kids who rarely speak answering questions. There. Done.”

Send us your stories about using the materials in the archive!