This month, we’ve had Sue Weekes from Canberra volunteering with the Living Archive project team. Here’s what she says about her experience. 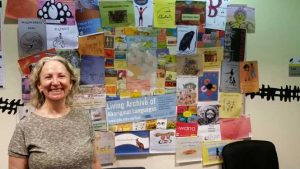 The Living Archive of Aboriginal Languages welcomes interns and volunteers willing to assist with retaining a special collection of the Northern Territory, produced by local people. I recently completed a month long program which was my attempt in helping to provide access to this unusual and unique collection.

The Living Archive has a number of hard copy texts that have been donated to the project for digitisation. In my volunteer role I checked the titles on Trove so the team could decide who to give their copies to. There are copies spread throughout the NT in the CDU library, the NT Library, and Batchelor Institute, and in Canberra in the (the NLA) and AIATSIS. The project team will talk to the NT Library about adding these hard copies to their special collection.

In my other activities, I worked on preparing digitised materials for uploading to eSpace, the CDU digital repository which stores all the digital artefacts in the Living Archive. There were a few collections of books from Papunya and Barunga that had been digitised but needed to be prepared as PDFs and text files with cover images. I also worked on text correction of the text files generated by OCR and compared them to the PDF files – and gave me the opportunity to read and learn some Kriol language which is used in a number of Aboriginal communities across the NT. I also helped prepare for the repatriation of digital files to the communities of origin by creating a list of file numbers and sizes.

The Living Archive is located in the Northern Institute at the Charles Darwin University. I can recommend July as a lovely time of year to visit Darwin, and a chance to escape the cold weather down south. The campus is on the north side of town, but easily accessible, and has a number of activities that a volunteer can attend, such as talks and seminars. There are also other cultural institutions in Darwin that are well worth a visit.

I really enjoyed my time here getting to know Cathy Bow the Project Manager for the Living Archive who was always helpful and instructive, staff of the Northern Institute who were very welcoming and inclusive, and participating in some of their events, in particular the activities held here for NAIDOC week.

Other interns or volunteers could further assist in the Living Archive program, either by working in house or online anywhere in Australia, so that these endangered texts can be edited and uploaded to the Living Archive. Performing this work will ensure access for readers, researchers, and reach other interested audiences Australia-wide.