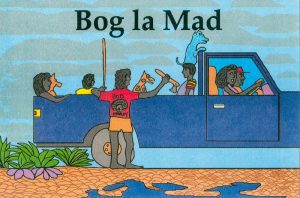 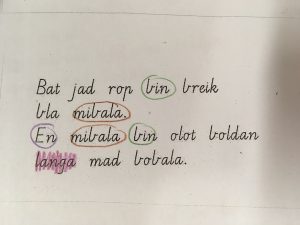 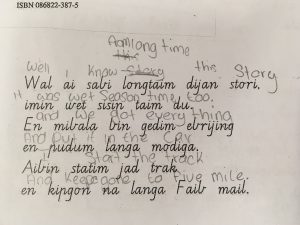 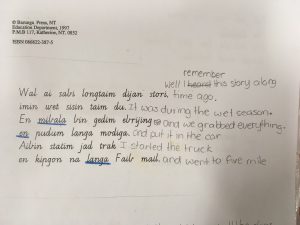 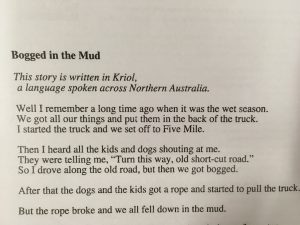 Liz Clarkson is a year 9 teacher at Marrara Christian College in Darwin. At the end of 2017 she experimented with using Kriol books from the Living Archive with her class of Indigenous students. Here she describes how she used the materials the first time – see Part 2 for how she revised the activity for the group the following week.

My year 9 class consists of students from Minyerri, Beswick, Yarralin, Belyuen and Maningrida. Their literacy in English is not strong, and I wasn’t sure whether they would all be able to understand Kriol but I thought there was a good chance they would relate to Kriol because of the common usage of Aboriginal English. This did seem to be the case and most students did respond to it. We read the story Grin Brog (Green Frog) in Kriol and also watched another video of The Christmas Story in Kriol and they really responded well to both. 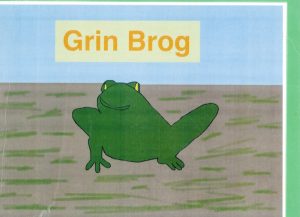 One student who seemed to relate the least was from Belyuen where they don’t speak Kriol. But interestingly enough, another student from the same community could understand it and responded really positively.

There were two groups, one more literate than the other. The first group worked through the instruction questions fairly successfully. We read the story together. One student who was confident in Kriol was able to decipher it even though she was not used to reading Kriol. She said some of the words were different to what she was used to, probably because these books were published in Barunga and use the local variety of Kriol. Each student was able to discuss the meaning in English. We looked for Kriol words which repeated in the story and then wrote down what those words were in English. 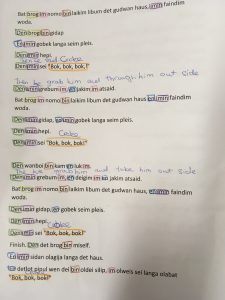 The students all seemed attracted to different tasks but were all engaged. One student colour coded a number of words – colouring all the same words one colour and working out what those words were. Although they all translated one or two sentences, one student enjoyed going on with this and worked hard to write down translations for the whole text. I could see from his writing that he struggled to notice when articles and prepositions were needed in English. Another student was not keen to write but orally worked on translations with me. She was able to switch easily to the correct use of articles and prepositions.

This was an interesting diagnostic tool for me to see who was switching confidently and who struggled to recognise differences between Kriol and English. I would try this activity earlier in the year next time so I could include some of these aspects in my program planning.

With the lower group, concentration and behaviour was an issue. We sat on the floor with clipboards. It was hard to use the digital version of the book as we were on the website trying to view it instead of downloading, which lets you click through the images more easily. The lesson with the lower group was a little less successful as there was one student who was happy to copy the translations but he wasn’t really learning through it. Another student who was not keen to read or write was happy to listen to me read the Kriol and he could tell me what it meant. This group found it hard to concentrate on what they might learn from the language exercise. 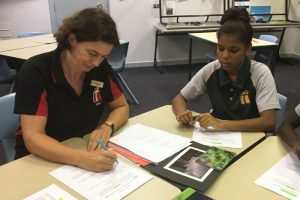 Go to Part 2 to read about the second class using Kriol resources, and Liz’s reflections about what she and the students learned from the activity.