It was such a delight to visit Ngukurr and spend a week with the wonderful staff at the Ngukurr Language Centre. I was able to go and meet a number of people in the community and show them the materials in the Living Archive, and talk about how they might be used in community.

As it says on their website:
Ngukurr is a large Aboriginal community in southern Arnhem Land, situated on Ngalakgan land. Formerly a mission, the community population covers 8-10 heritage languages that are all now endangered. The main language spoken in Ngukurr today is Kriol but within the community, traditional languages are held in high esteem. The Ngukurr Language Centre is a small, independent, non-profit organisation. The goal of the Ngukurr Language Centre is to revitalise, document, teach and promote the traditional languages of the community via a range of community-based language programs.

I had wonderful chats with the staff at the language centre, who are all passionate about their languages. 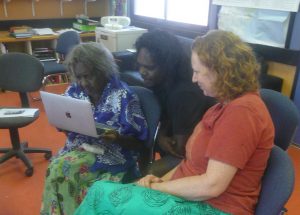 Grant Thompson and Cherry Daniels and I looked at the Marra and Ngandi materials that were produced at the Language Centre and are now available on the Living Archive. They enjoyed reading the stories and looking at the photos. As a senior elder, Cherry was able to give permission for all the materials in those languages to be made public on our website, even those which don’t name the contributors.

Angelina Joshua has her own story to tell about how her passion for Marra language ended up as an award-winning website for SBS called “My Grandmother’s Lingo.” I had the pleasure of watching Angelina teach a language class to a group of year 2 students from Ngukurr Community School – they were completely captivated by her, and were able to put together short sentences in Marra about animals and their own totems. 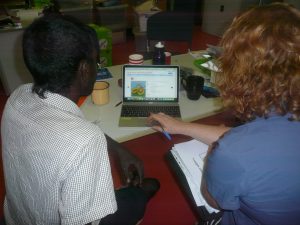 Dean Austin Bara looked at the materials in Wubuy language from Numbulwar and considered how he could use them in teaching Wubuy at the school. He’s also keen to make his own new materials that will eventually go on the Archive site.

I showed some of the Kriol materials to teachers and others from the school, who enjoyed reading the language that is most widely spoken in Ngukurr. Native speakers of either English or Kriol were able to read the stories, as Kriol is written very phonetically and the stories in the Archive are easy and fun to read.

Talking with a number of people around the community, we found very positive attitudes to Kriol, and everyone we spoke to agreed that non-Indigenous people living in Ngukurr should learn to understand and use Kriol to build better relationships in community. 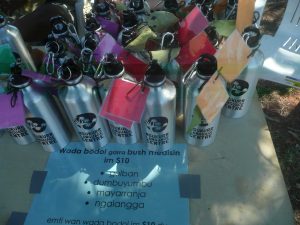 I was pleased to be able to attend the Ngukurr Festival, where the Language Centre was selling water bottles with the word for ‘water’ in all the local languages. The bottles were filled with local bush medicine, and were especially popular with the ‘munanga’ (non-Indigenous) in the community.